We are accepting nominations for the 2023 David Besst Award.

Nominations for the 2023 awards are due January 24, 2023. Please use our NOMINATION FORM . Honorees will be recognized with a plaque at the Family Caregiver Day at the Capitol in March 2023.

Nominations are due at the beginning of each year and a selection will be made in February. Honorees will be recognized with a plaque at the Family Caregiver Day at the Arizona Capitol.

David Besst had a very successful 25 year career in the business community. Mr. Besst was introduced to caregiving through an aging parent. His experience caring for both of his parents over a 10 year span inspired him to go back to school, where he earned a degree in the Gerontology Program at Phoenix College in 2005.  After serving a five month practicum/internship with the Governor’s Advisory Council on Aging, Mr. Besst started a position as the Caregiver Programs Specialist for the State of Arizona in the Division of Aging and Adult Services. He also served as Aging Programs Manager and Team Lead for Home and Community Based Services.

He was often considered a maverick in his field and a system change for family caregivers, ADRC’s, and the Lifespan Respite Programs including respite vouchers programs.

From 2006 to 2008, Mr. Besst provided leadership to a sub-committee of the Governor’s Advisory Council on Aging that developed and launched the Arizona Caregiver Coalition (ACC) in May of 2008.  The ACC is based on C.A.R.E., an acronym based on Collaboration, Advocacy, Respite, and Education. 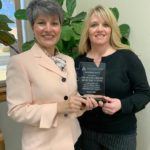 The SJRC mission is “Quality Care., Quality Service, Quality of Life.” Susan J. Rheem, was a true visionary 40 years ago as to what Arizona needed to support caregiving families, especially in rural Arizona. 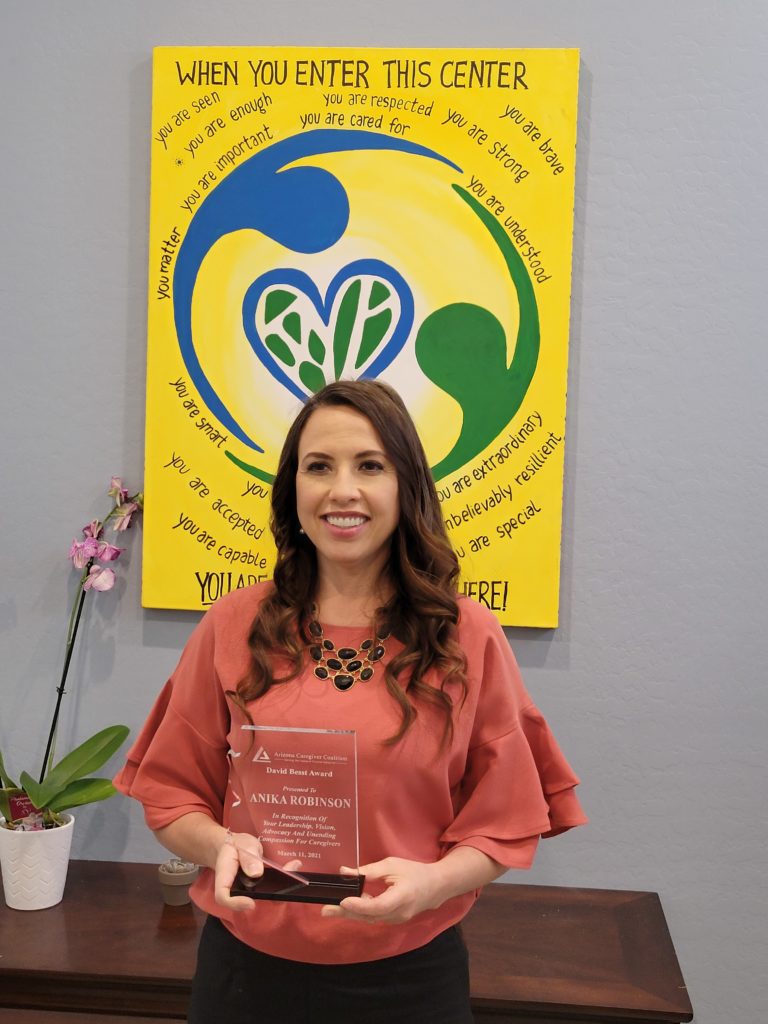 Anika Robinson has been advocating for families and children with high acute needs free of charge for the past five years while caring for her own children with high needs. When she saw a broken mental health system, she decided to make it better. She advocated for the mental health rights of the 19,000 children and youth who were in foster care and helped pass new laws in 2016 now known as Jacob’s law. After Jacob’s law passed, she helped open a nonprofit called ASA Now in Mesa and started monthly support groups, helping families get to know each other so they could be a natural support system to each other. She continued to advocate in numerous committees including the Citizens Review Panel, the Foster/Adoptive/Kinship Care Oversight Workgroup through Mercy Care and the Policy Workgroup at AHCCCS.

Jane Gerlica worked for Banner Health for 33 years as a case manager and social worker and joined the team at Banner Alzheimer’s Institute (BAI) in 2017 to begin coordinating the collaborative effort between Banner and City of Tempe to launch the first Dementia Friendly (DF) community in Tempe. She developed and expanded the Memory Café at the Tempe Public Library. Her hard work includes coordination of Memory Café program volunteers, life enrichment programs for persons with memory loss and the support group for caregivers. In addition, she leads the DF Action team and coordinates Dementia Friends Champions, Dementia Friends Information Sessions as well as monthly caregiver lecture series. Under Jane’s guidance more than 5000 community members have participated in Dementia Friendly informational sessions raising awareness of dementia and the needs of family caregivers while lowering stigma. 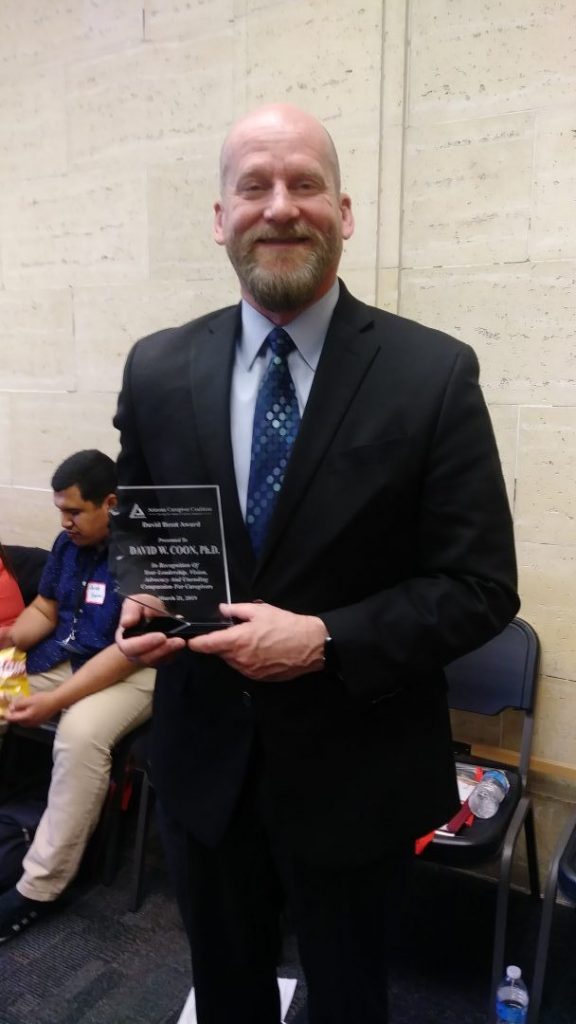 David W. Coon is Associate Dean and professor at the ASU College of Nursing and Health Innovation. Professor Coon designs and evaluates interventions, such as CarePRO and EPIC that focus on culturally diverse groups of midlife and older adults facing chronic illnesses (e.g., dementia, cancer, depression) and their family caregivers. He was an investigator on the NIH REACH projects—a large multi-site intervention study focused on the creation of an intervention for caregivers of people with dementia. His collaborations have led to Dementia Capable Systems grants including the current project with the Alzheimer’s Association, PCOA, Area Agency on Aging Region 1, the Arizona Caregiver Coalition, the Arizona Department of Economic Security, and the HOPE Network that expands the delivery of evidence-based programs for people living alone with dementia, family caregivers of people with intellectual disabilities (e.g., Down Syndrome) who are developing dementia as they age, and the underserved Latino population. 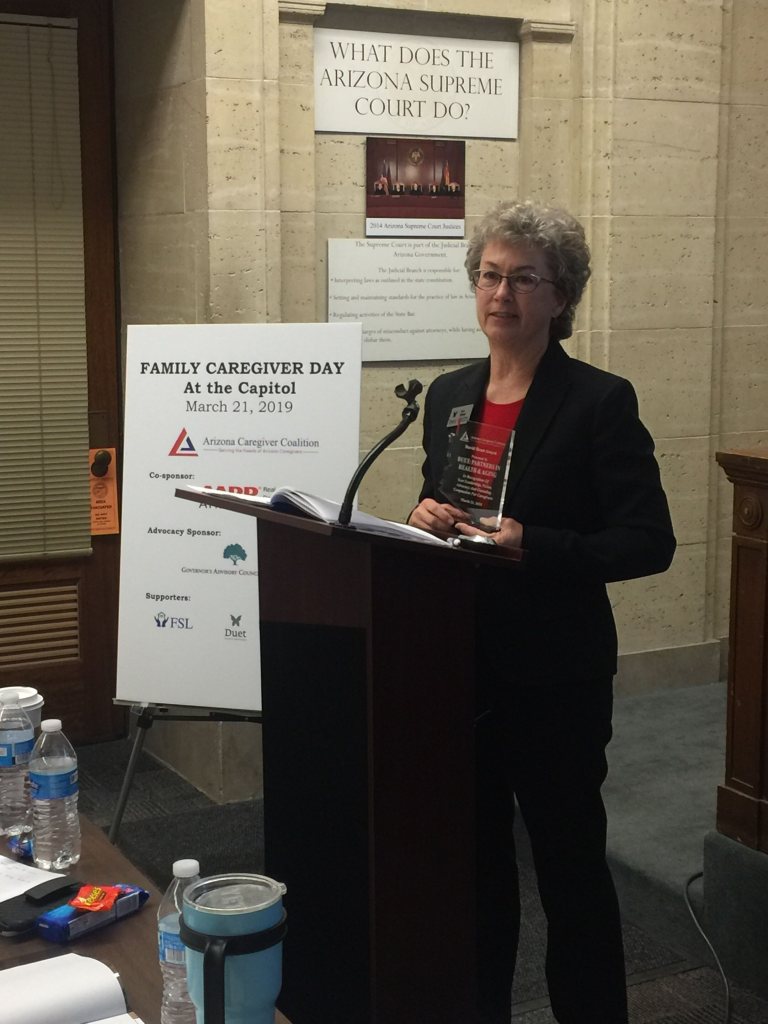 Founded in 1981, Duet is a nonprofit, interfaith organization whose mission is to promote health and well-being through vitally needed services to homebound adults, family caregivers, faith communities, and grandparents raising grandchildren. Duet does this through free-of-charge services for caregivers, including support groups, mentoring, personalized information including community resources, and guided assistance in the caregiving journey. Community members also become educated on the importance of helping family caregivers understand that help is available, for example through support groups. Accepting the award was Ann Wheat, Executive Director. 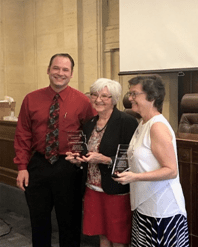